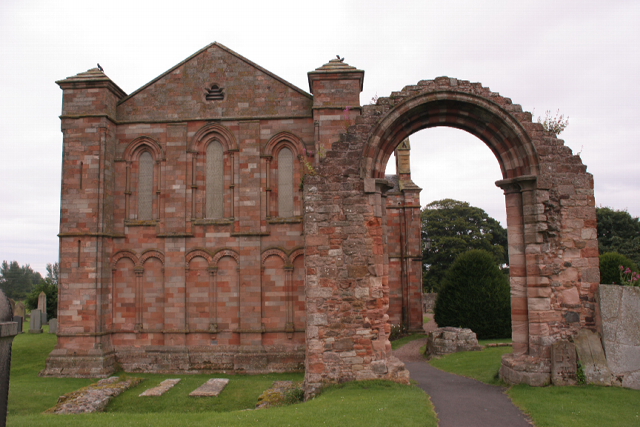 Worshipping this morning in Coldingham Parish Church I was struck by the irony of a non-conformist 21st century congregation worshipping in the last remnant of an ancient Roman Catholic Priory. What would John Knox and his fellow reformers have made of this consorting with “Papists”?

The church building was renovated in early 2013, using elegantly simple modern materials to complement the 13th century red stone pillars. The stained glass windows in the east wall sit comfortably above the simple wooden cross and communion table, in full view of the congregation seated on plush red chairs.

The singing was also a mixture of old and new: “Crown him with many Crowns” followed by “I the Lord of sea and sky”, and finishing with “Will you come and follow me?”. Young minister Rev Andrew Haddow (in his first sole charge) was called to preach to rows of ancient pews but took charge beautiful new facilities. Once the pipes are re-installed in the rear loft, perhaps his guitar will join with the majestic old organ, which will played remotely from a new console in the front of the church!

Whilst some will raise eyebrows at these anachronisms (whether viewed from ancient or modern perspective), or the theological contradictions surrounding the parish, perhaps Jesus and his followers would rejoice at the holy muddle. When the disciples complained of others working in Jesus’ name he rebuked them:

‘Teacher,’ said John, ‘we saw someone driving out demons in your name and we told him to stop, because he was not one of us.’  ‘Do not stop him,’ Jesus said. ‘For no one who does a miracle in my name can in the next moment say anything bad about me, for whoever is not against us is for us. Truly I tell you, anyone who gives you a cup of water in my name because you belong to the Messiah will certainly not lose their reward.’ (Mark 9:38-41)

And Paul warned his readers of artificial divisions in the body of Christ:

There is neither Jew nor Gentile, neither slave nor free, nor is there male and female, for you are all one in Christ Jesus. Galatians 3:28 (NIVUK)

Praise God for Coldingham Church, holding past and present in tension – a witness to a God who glories in the diversity he created, who loves each person, and calls them all to himself.

My wife Elizabeth and I were commissioned as Officers (ministers) in The Salvation Army in 1997, and have served in appointments in England and Scotland. Since July 2016 I have been working in The Salvation Army's Scotland Office as combined parliamentary and ecumenical representative.
View all posts by prophetable →
This entry was posted in Places, Reflection and tagged Church, History, Jesus, Observations, Paul, Priorities, Reflection, Reformation, religion, theology. Bookmark the permalink.
%d bloggers like this: